The Chamber of Southern Saratoga County’s Affiliation with the Capital Region Chamber Allows for Increased Service to the Local Community.

In January 2020, The Chamber of Southern Saratoga County became an affiliate of the Capital Region Chamber . This affiliation though had been years in the making. A couple of years ago, the board for The Chamber of Southern Saratoga County started to ask some difficult questions. Pete said they started to wonder, “If things happen to be difficult financially for the community or economically for the country, how strong is our chamber in terms of being able to survive in a very competitive environment? Is it the right thing for us to remain a stand-alone organization or should we affiliate with somebody?” After pondering those questions, Pete said, “It was decided that the Capital Region Chamber was the correct partner for us. The decision was made by vote of the board and then of the membership back in the fall of last year to come together as one organization with the Capital Region Chamber.”

Fortunately, this affiliation came at just the right time. Pete said, “Turned out it was a pretty smart decision given everything that has happened since January 1st. I think we would have survived it as an organization even if we had stayed independent. But the reality of it is because we have combined resources, I get to spend most of my time making sure our members are okay versus worrying about if the organization is okay. I think this is a lot more important now with the current challenges.”

This affiliation has provided major benefits for the members of The Chamber of Southern Saratoga County. Particularly, the affiliation has enhanced the Chamber’s ability to provide for the members throughout COVID-19. Pete said, “We have been able to stay focused on them [the members]. A lot of not-for-profits nowadays are really in major distress right now and in survival mode. I am not going to say that it has not impacted us, of course it has. We are a non-for-profit too just like everyone else, but we have stronger resources combined.  So, we can keep an eye more on our members. Are they okay? Do they need more financing? Do they need PPE?”

Aside from providing resources to their members, the chamber has been able to provide clarification on the ever-changing laws.  Many members have been directly impacted by the laws put in place to try to combat COVID-19. Sometimes it can be difficult to figure out the appropriate response to these laws. Fortunately, the chamber has been able to help successfully clarify confusion on many topics for their members. Pete brought up the example of clarifying how many people can eat in a restaurant and under what circumstances alcohol can be sold.

Overall, the affiliation has allowed the chamber to continue to serve its members effectively and remain local. Pete said, “We have stayed true to our local roots. We continue to work on a lot of things right here in town.”

Pete is also personally invested in the Capital Region outside of work. Pete highly enjoys living in the Capital Region and wants to keep it a great place to live. Pete said, “From an employment standpoint this is a phenomenal place to live in New York State. Then there is the fact that we are close to all the fun stuff. I mean we are still close enough to New York City or Boston if you really want to go and hang out in the city, but you are also close to mountains, lakes, camping, and historic sites.” One of Pete’s favorite historical sites in the Capital Region is the Erie Canal. In fact, it was one of the reasons he decided to move here with his family and accept the leadership position at The Chamber of Southern Saratoga County in 2011.

Since Pete moved here, he has found so much to enjoy. Pete says, “We are connected to so much right here that is fun to do and explore and I don’t think most Capital Region residents appreciate that. They need to spend more time paying attention to where they are. Because we are living in a community that has it all.” 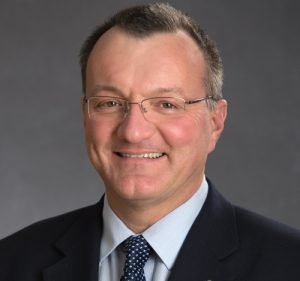