Designers Plumbing and Hardware, located in Miami Florida, has been a client of EXEControl Global Solutions for Seven years. Ada Aldana, the owner of Designers Plumbing and Hardware, provided EXEControl Global Solutions with an interview to give some insight into her company and what it is like to be a woman business owner. Ada told us a story of how Designers Plumbing &amp; Hardware came to be. She said, “My sister started the business in 1986. She had lost a very lucrative position within an organization and she decided that she did not want to be an employee ever again. This opportunity arose through her lawyer. She took it and it was a disaster. We almost lost everything we owned because the guy that we were buying the business with, was a crook. The lawyer felt so bad that he went to bat for her, so hard that we ended up with the business. So, obviously it was a mistake, that turned out very well.”

When the company first started, Ada, her sister, her mother, and her father all worked for the business. For a long time since then, Designers Plumbing and Hardware had been a family run company. Ada shared that “At the very beginning it was a real family affair. At this point it is just me and my niece.” Ada is grateful that the company has grown a lot since when it first started.

Ada though, did not always consider herself to be an entrepreneur. Ada shared, “I have had like 3 or 4 lives. I graduated as a medical technologist from college. I did lab research with the University of Miami for about 10 years. Then I decided that was no longer for me. I went on to business and tried to do consulting and that did not work out to well. And then I went into a bank and ran the facilities management for a chain of banks here in south Florida. I wasn’t on the banking side. I was on the facilities management side. And I did that for another 10 years until Designer’s Plumbing and Hardware was growing and Lilliam [Ada’s sister] needed me to work full time. So, I did the job.”

Ever since then Ada has continued as a prominent woman in the business field. Historically, being a woman in business brings about challenges. When asked what challenges she has faced, Ada replied, “Oh let me count the ways. Too many to count.” On the other hand, there are also some benefits. Because my particular industry is now so design oriented, that it is very suited for women.”

A majority of Designer’s Plumbing and Hardware’s business comes from jobs on high end homes. Her company is involved throughout the entire home design process. Ada described that the mechanics of how the details of a house is chosen has changed a lot over the years. She said, “It used to be that the women would come, and the men would not even show up until the last minute to do the deal. Now, it is a very collaborative event.”

Ada would like to encourage aspiring female business leaders with a piece of advice, “Get the courage to not get discouraged and not make it personal. Business is never about you. It is always about the deal. Or it is always about the situation or the other person. Or maybe you could have presented it better, but regardless be resilient. Be persistent.”

Ada is excited to see how the new generation of female business leaders will continue to grow and change the world. As for herself, she does not know if she will ever be able to step down from her position. Fortunately, Ada enjoys her work. Ada said, “I don’t see retirement in the picture any time soon. And I do like what I do so that makes it better.” She went on to explain, that her family is all near her and the business allows her to travel the better part of the world. For this reason, she believes that this job has given her the best of two worlds; being busy and challenged and at the same time taking time off whenever she wants.

Thank you Designers Plumbing and Hardware for being a loyal client of EXEControl Global Solutions for so many years! Thank you, Ada, for providing us with the interview. 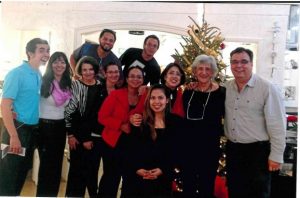