EXEControl Employees, Drew Jones and Christopher McCoy, Use Their Computer Skills to Serve Their Communities.

EXEControl cares about its community. We had two employees serve their neighbors using their computer skills. They both provided us with some of the details as to how they served their communities.

Chris McCoy said, “A month or two ago, I helped my elderly neighbor clean, defragment HDD, remove old programs/applications, and upgrade to Windows 10. He was worried about Windows 7, his previous OS, no longer being supported and therefore security issues, so I spent the afternoon with him and revived his computer.”

Drew Jones said, “I recently helped an elderly couple in my community with their computers. I had been informed that they were running very slow and were not working correctly. So, I eventually helped them out by looking at the machines. When I first received the machines, I went through and cleaned out all the bloatware that was on the machine. Bloatware is software that comes installed on your machine by the manufacturer or by the user install other programs. Bloatware takes up space and can cause your computer to run very slow because of its high usage or resources. After cleaning up the pcs, I decided to look into the antivirus solution the elderly couple had installed. After some further research, I found out that it was not doing its job, so I uninstalled it all. After uninstalling the old antivirus, I went out and downloaded and installed an antivirus solution that would help protect their machine. The last and final step I did was make sure all the OS was up to date. After upgrading through a couple new versions of windows 10 the computer was ready to be delivered back to the couple. In the end, they were pleased with result and loved that their computers are running smooth again.”

EXEControl is proud of its employees using their computer skills to serve others. Great job Drew and Chris! 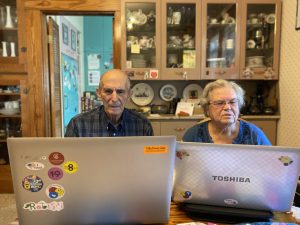