Drew Jones, a recent college graduate, has started working as a network specialist for EXEControl Global Solutions. We are excited to have Drew join the EXEControl team. Drew provided us with an interview to help the EXEControl community get to know a little more about him.

Drew described himself as someone who loves learning. This is what originally pulled him to the technology field. He said that the technology field was exciting to him because it was changing so fast, allowing him to keep learning. This is part of what makes EXEControl a good fit for Drew. Drew said that he was excited to work at EXEControl because he gets to apply the technology skills he learned in college in a business setting. Although he worked on several technology teams in college, these teams were run differently than a business is run. EXEControl provides Drew with the ability to learn how to use the skills he developed in school in a new way.

After talking to Allan Robison and Craig Kimborough during the job interview process, Drew knew that this position was exactly what he wanted. So far he has been impressed with the EXEControl community. He said the number one thing that has impressed him about EXEControl has been communication skills. He works out of the Fort Wayne office but knows that there is always somebody he can talk to. No matter the question or time of day Drew can reach someone who is willing to help him out.

In addition to his reasons for joining EXEControl, Drew let us know a little bit about who he is outside of work. Drew recently graduated from Grace College. At Grace College he was a member of the cross-country team. He spends much of his time running or being outdoors. He loves hiking, kayaking, running or anything that involves being outside. If he were forced to stay inside, he would spend his time testing out new technology, or doing PC gaming.

Drew said that if he could only have one meal for the rest of his life, he would eat smoked salmon. If he was stranded on a deserted island, but all his human needs were taken care of, he would bring with him a boat and a shelter.  He would want the shelter to sleep under and the boat to escape.

We are glad that Drew chose EXEControl because he makes an excellent addition to our team. We hope this helped you get to know him a little better. When you see Drew around make sure to say hi and welcome him to the EXEControl team. 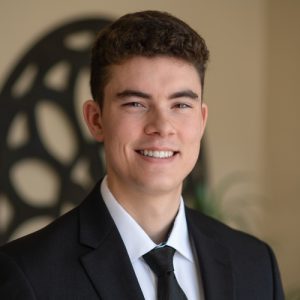