In 2004, David Fizer, part of EXEControl’s business development team, read an article about the demise of honeybees while waiting for his Doctor’s appointment. After reading the article, he was completely inspired to keep honeybees in the couple acres of land behind the house.

He finds beekeeping to be a sort of “therapy.” David says, “I can put my veil on and go to one of my apiary’s and literally forget about all the troubles of the world!  They provide a solace to me like nothing else.” Interestingly, each hive is unique and has specific personality traits. David loves knowing that what he does as a beekeeper can help the hives flourish.

David had a difficult first two years of beekeeping. Every year after the brutally cold northeast winters, David would find that all of his hives had died. David says, “My first 2 years of beekeeping I started each spring off by purchasing 3 packages of bees.  Each year all 3 colonies grew into very strong, robust, thriving colonies which gave me a false sense of security and had me convinced that they would survive the brutally cold northeast winters… each following spring I was greeted to all colonies being dead.”

David says his one piece of advice for new beekeepers would be “that there is no ‘one best way’ to keep bees.  Certainly there are best practices however these best practices assume that all hives are the same… needless to say they are not!” He would also tell new beekeepers to not go into the hives too often. Only go into the hives when it is necessary.

EXEControl loves hearing about what David is doing with his bee hives. Next time you see David, make sure to ask him about his bees! 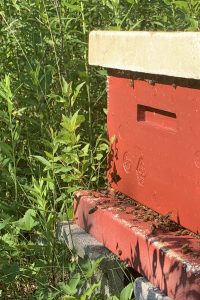